California Part 3 - or Good Bye Cali aka The Salmon Experience


After Harald was dropped of at San Francisco Airport, decisions had to be made. Our choice was between hiking into the Middle Kings and spending the last week of our trip in this High Sierra classic or driving up north to enjoy one of the Pacific Northwests rivergods, the Little White Salmon.

Since we still felt a little fatigue from our trip into the Upper Cherry and our time window until our flight back was pretty narrow, we weren`t very sure about the Middle Kings at all.
So after rolling the dice we decided to drive up north and look for some fun in the Columbia River Gorge.

On our way up we stopped at the Trinity River and ran a stretch called the Burnt Ranch, which is a summer California classic since flows are always in. After that we filled up gas (again) and drove the night to wake up ready for two North Western classics, White Salmon and Little White Salmon.

First we ran Farmlands on the White Salmon which is a beautiful class 4 gorge and gives you a little insight what the lower stretch will be about. Cold, clear, fast flowing water in an basalt gorge featuring drops, caves and trees.

Then Daniel and Reiner decided to run the Green Truss section on the White Salmon, a class 5 stretch that features bigger drops and, in the lower part, pushy longer cataracts.
Always be aware of fallen trees that mark the most dangerous features of the river!

On Big Brother, the biggest drop of this stretch, Daniel and Reiner went into the cave on river right, but at lower levels you can easily paddle out and leave the darkness without too much excitement.

After taking out at the wrong place (about one mile too early at some wooden stairs rafters use for putting in) we watched the last NBA final accompanied with some beers in the beautiful town of Hood River and the next day we were of into one of the highlights of the trip, the Little White Salmon.


Without anybody knowing the river the first mile can be an exciting boat-scouting fest, but at our levels it turned out pretty manageable. 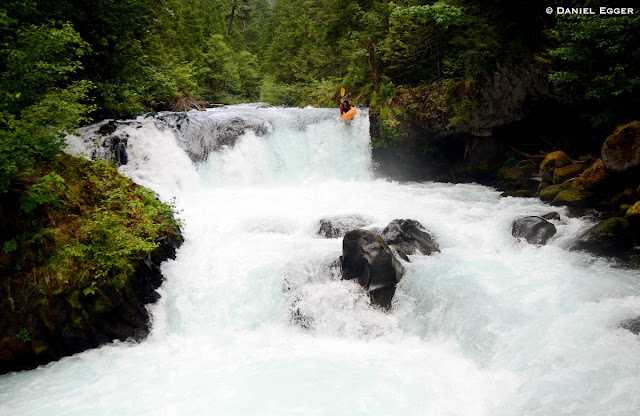 So after running most of the drops before Spirit Falls we finally arrived at one of the most famous places of the kayaking world.

Spirit Falls is a 10 meter drop, featuring an autoboof, a pretty hard landing if boofed too hard, a big cave behind the falls and a nasty drop bellow called Chaos. Chaos has two lines, the right one being the main channel and having a circulating hydraulic that has no escape for somebody swimming in there alone. So after Spirit you want to make sure to either have a great boof in the right channel or to make it into the left channel and run of the easy slide.

So Matthi went first, had a great line and chilled through into the eddy below.


Then Daniel boofed the shit out of the falls and landed a little left of the boil which resulted in blowing his sprayskirt and swimming in the pool below Spirit Falls. He luckily made it to the shore on the left but his kayak rotated in Chaos until Matthi jumped in to get it out.

Then myself flat-landed Spirit too, felt my back a little but luckily didn`t hurt myself too bad.

So what was left, was a 10 hour drive back to Sacramento to bother Daniel and Diane one last time and then catch our flight home.

Can`t wait for the next time to go paddling and I think the Pacific Northwest would be a great choice to do so...


So big thanks to Daniel Brasuell of awetstate.com and Diane Gaydos for their hospitality! Can`t wait for you guys to come to Europe to do some creeking together... Darin and Rok for the Beta... Liquid Logic, Hans Mayer of Stohlquist and Piero of Alpin Action for the support... and the Vboyz Crew Daniel Egger, Matthias Zeiner and Robert Machachek for the nice trip!

Posted by alpinactionteam at 10:01 No comments: